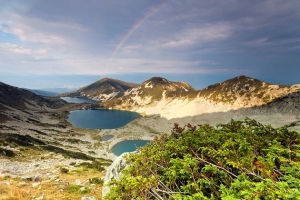 Kremenski Lakes are a group of five lakes in Northern Pirin. The lakes are part of Pirin National Park. They are situated stepwise in the Kremenski circus 2304 – 2356m above sea level. The lakes are glacial; the water in the summer is with temperature of 12.5 – 14.5 °C. Kremenski lakes drain in one another, and their waters flow into Retije River.

The lakes can be reached most easily from the Valley of Retizhe river (one of the main suppliers of Mesta River) and from Jano peak. The trail starts at the confluence of Retizhe River with Kremenski flow, about 2100m above sea level. Two trails start there and lead to the top. The short one goes along the right shore of Kremenski stream and goes up to the plateau near the two lowest Kremenski lakes at 2200m above sea level. The other one – long and sloping - starts again from the confluence of Retizhe River with Kremenski flow, but first goes to the East and then to the West on the right slope of the river.

Passing the plateau the trail goes through densedwarf pines between the two lakes and then goes out to the big moraine below the Lower Kremensko Lake. From there along the flow of the Lower Lake comes a heavy climb to reach the Lower Lake (2300m altitude).The same trail goes along the west coast of the three highest lakes, going deep into the southern part of Kremenski circus. At the base of the Hlopki ridge under Djano, the trail turns into steep serpentines on the rocks and goes out at the west to the crest of Dzhangalitsa ridge, next to Djano about 2650 m above sea level.
Bezbog hut is start point for the lakes, and the best views of them are revealed from Orlovets peak (2685 m).

View the embedded image gallery online at:
https://www.destinationrazlog.com/index.php/en/kakvo-da-3/prehodi/item/196-kremenski-lakes#sigProGalleriafeea2dfe7d
Tweet
More in this category: Tevno Lake - the heart of Pirin Mountain »
back to top
List with onlain bookmakersGBETTING