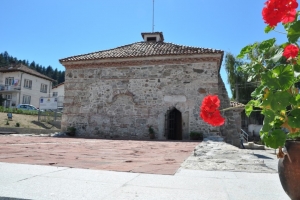 The healing waters of the "Roman bath"

A wonderful symbol of the village of Banya, preserved through the centuries and withstood the changes of time, is the mineral bath, known as Old Bulgarian (Roman) bath, built in typical Roman style.

The Roman bath has a specific construction - sequence of stone row with 3-4 rows flat baked bricks. The bath has a hypocaust heating system, the walls have built-in wall channels through which hot water ran and so it extra warmed the bath, thus creating a cozy atmosphere even during the cold winter days. There are niches in the walls where people taking a bath left their belongings. Even today, the old hangers have been preserved. There is also a small niche, in which a fire was lit and used as a light; on the dome you can see a few openings, which had the same purpose. preserved till today is also a water mixer. Through it passed the hot (54 degrees centigrade) and the cold water, thus mixing to make the perfect temperature for bathing. The pool has its original pavement on the bottom; the troughs in the bath are not authentic. After the restoration they are made of marble in order to show the contrast between the bath in the past and nowadays. Before the extension of the bath was built in 1907 nobody was responsible for the hygiene in it. The pool is designed in a way to self-clean with water flowing out of it was cleaned the toilet room. The water flowed out of the troughs cleaned the space around the pool.

There was an order for bathing – in the morning the bath was used by men and in the afternoon - by women. Before the extension was built, one could enter into the bath directly from the street. From the warm fountains with their own water containers people wash their bodies before leaving the bath. After that they dry themselves with large white linens which they bring from home.

Today the bath impresses its visitors with its magical atmosphere, combining history and legends, past and present.

Proof that the waters in Banya are healing, can be found in the legends for the life of Romans who actively used the magical advantages of the area. About the healing waters probably knew also Philip of Macedonia – a legend says that he used to come here to heal his legs.

Many Roman coins found at the catchment of the waters near the old Bulgarian (Roman) bath are proof that even in the ancient times Banya was known for the healing waters, life and culture.

Flourishing of balneology and the use of the healing qualities of the water which become a motive for travelling is all Romans's contribution. The mineral springs become a mark of prestige, not only for healing purpose, but also for fun and entertainment.

Ask the locals for tempting mineral springs and natural “Jacuzzi” around.

View the embedded image gallery online at:
https://www.destinationrazlog.com/index.php/en/zabelejitelnosti-3/arh-pametnici/item/199-the-old-bulgarian-roman-bath#sigProGalleria1a5df42087
Tweet
More in this category: « The Painted Church
back to top
List with onlain bookmakersGBETTING