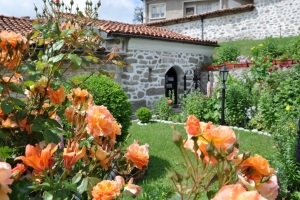 The church “St. St. Teodor Tiron and Teodor Stratilat” was built as a basilica from stone and mortar, and bricks, dated from 1614, it impresses the tourists with the wall-paintings of more than 400 years. The temple is small-sized, as the Turks at the time required; the outer view wasn’t different than the other buildings. Half in the ground, without bell tower and dome, with small windows; the temple looked more like a small fortress. The amazing wall-paintings and the authentic architecture of the temple assign it to the most treasured example of the Bulgarian art.

The temple is a cultural site of national importance included in the list of the 100 national tourist sites of Bulgaria.

Entering the temple is in a way that Christians do – you bow while going down the three steps to the temple. On your way in, you see a lot of beautiful wall-paintings which recreate bible scenes, the figures of many saints, and local legends. There are a lot of unique things here – the whole temple is painted, there are 460 figures, the female ones are more than 30.

The wall-paintings have their authentic look, they have only been cleaned. The three master-builders Stanko, Smilen and Spas are also painted on the walls, as well as the donators of the temple – Bogdan, Hasna and Bogdan’s son. On the ceiling Jesus Christ is painted in a “rocket”, the wall-painting catches the attention of every guest in the village of Dobarsko who visits the temple. The scene is called “Transfiguration of Christ”.

The altar is arranged with the icons of St. Teodor Tiron, St. Teodor Stratilat, Virgin Mary, Jesus Christ, Joan the Baptist and Archangel Michael. St. George and St. Dimitar are painted in full-length only here and in Aton, and not on a horse.

On the floor of the temple is the plate with double-headed eagle – the symbol of the Russian church – a gift from Russian monks. At the feet of the proud bird are the rod and the scepter, symbols of the secular and ecclesiastical power, which united lead the nations forward. On the plate the experts read the year of 1122. The material, from which the church was built, is also characteristic for the period XI-XII centuries. It would not be a surprise if the temple is even older. A legend says that tsar Shishman was secretly married exactly here. The first written document for it is kept in the Rila Monastery and is his tsar diploma from 1378.

Visiting the village of Dobarsko, you can learn a lot of interesting facts about the history of the village, the occurrence of Christianity in the region and the preserved traditions through the centuries. The locals connect its origins with the settlement of Samuil warriors after the tragic battle near Belasitsa (1014). The legend says that the first inhabitants of this unusual place, located on the southern slope of Rila Mountain, were the imprisoned in the battle near the village of Kljuch and blinded by emperor Vasilius II Samuil warriors. After the defeat in the Belasitsa Mountain in 1014, they head to the Rila Monastery but winter caught them on their way. Many of them stayed for the winter in the village, got married and established singing school. They choose Dobarsko not by chance. They found relief and healing from the spring with the healing waters that still springs in the yard of the medieval church “St. Teodor Tiron and St. Teodor Stratilat”. This story entered into local history and finds its place on the frescos in the church. The legend says also, that Kliment Ohridski also used the water from the spring to heal his eyes.